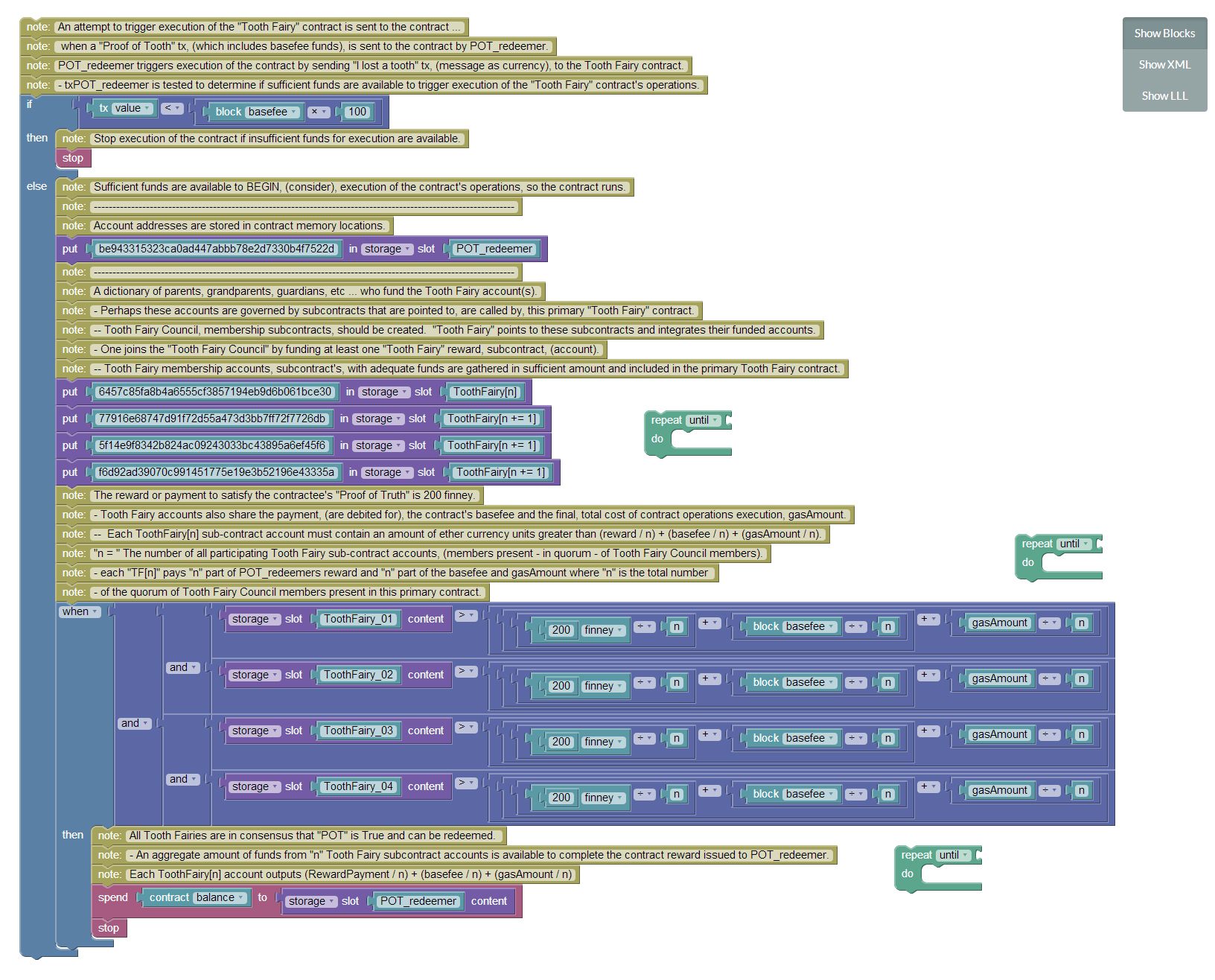 Using the drag and drop visual development environment, "EtherScripter" by @mode80, (message mode80 for entry into the EtherScripter Beta test), affords us the opportunity to reach, to look, to see further into Ethereum; to seek our own magical self through our practice of writing smart contracts executed by the Ethereum project's codebase engine(s), to practice and develop our smart contract writing abilities and to share that development in whatever way we might, (at this point), with others.

For those of us that enjoy visualizing program flow and program architecture, to assist us in developing creative constructions driven by code, by programming logic, EtherScripter, (and its development), is clearly a potential tool of great value for those that wish to take advantage and journey deeper into the ether.

When EtherScripter affords functions to users where a project can be persistently shared, in the style of shared whiteboard, where EtherScripters can gather together and author smart contracts together, we can certainly begin to see the value of the GUI interface, EtherScripter.

Risk is its own reward. The most satisfying game might only be described by the nth iteration.

The "Tooth Fairy" contract is social magic that might be distributed, might live, in the ether and can provide the Ethereum project with a smart contract, and smart subcontracts, which:

-- "Let's go visit the Tooth Fairy in the realm of Ethereum" ... mum might say.
-- A smart contract user, participant in a "Tooth Fairy" contract or subcontract, is afforded the ability to draw on deep social context, social metaphor.
-- A layer of user interaction where a social script is already in place guides the user.

- Provides an Ethereum contract example which:
-- is age, sex, race and culturally agnostic
-- is charitous
-- is inexpensive (with significant code optimization), and Gas to run contracts is a donation model.
-- can be accessed through a web or smartphone frontend, (social network)
-- has "social magic", incorporates racial memory and long standing folklore
-- can be felt at a visceral level, (the loss of a tooth, a rite of passage)
-- can be fun, (game theory)
-- brings "game theory" and "smart contracts" into the same space
-- makes available a distributed, cultural, social networking context for the continued execution of contracts
-- can be re-monetized through advertising, incentive to participate, (eg., free toothbrush, dental exam discount coupon, etc ...)

This OP screenshot of the "Tooth Fairy" contract v0.001a, (generated in the EtherScripter drag and drop interface), is provided in this OP as a loose, bare bones representation of what the "Tooth Fairy" primary contract MIGHT start to look like as implemented in Ethereum, at this point it is far more flawed than anything @mids106 and Joel could ever imagine, ;-). This is experimental, a learning exercise. This representation incorporates some python like program thinking, (think lists and dictionary iteration), into the framework of LLL upon which EtherScripter GUI is presented at this time.

The "Tooth Fairy" encourages you to build modules in EtherScripter, take a screenshot of your module that might satisfy or serve as a development step for the primary contract or any subcontract that could be pointed to by the "Tooth Fairy" main contract. Just a few lines of EtherScripter GUI blocks to address one issue in the entire contract can be more valuable than attempting to grow a new set of teeth all at once.

"Tooth Fairy" is used here, primarily, to get you working in EtherScript and to present your ideas so that mode80 will have Beta feedback and can continue to develop the features and functions for EtherScripter that might best serve the development of writing smart contracts in Ethereum, and of course, to give @Vitalik, @Stephan_Tual, @gavofyork and other principals involved in the creation of the codebase that is the greater Ethereum project some insight as well as to the level of understanding of the current participant set in this forum and their needs and desires for the development of Ethereum.

Additional thinking and outline of the "Tooth Fairy" contract using the language of commercial contracts can be seen here:

It's all a draft, it's all experimental, your input, your creativity has value. We are the game.
Tooth-Fairy-02.jpg 1.2M
1 · Share on TwitterShare on Facebook