Blockchain Games to Watch Out for in 2019 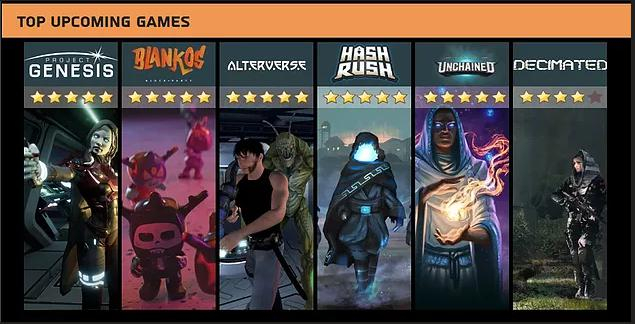 There are 2.2 billion people who enjoy blockchain gaming all around the globe and blockchain games have come up with more interesting games this 2019 to spice up the variety of games for their fans! Crypto Gamers Community recently made a list of Top Upcoming Blockchain Games as of January 2019 and here goes their list:

1. Project Genesis
This blockchain game is an exciting space combat game that is designed for first-person shooter gameplay, made by 8 Circuit Studios. Set in a make-up universe and based on the concept of Metaverse, the game’s goal is to dominate the galaxy.

2. Blankos
Blankos is developed by Mythical games in partnership with Third Kind Games. It is a Party MMO that focuses on customization, designing, building, and trading and collecting characters.

3. Alterverse
Alterverse is a blockchain game that allows users to build games in a multiverse where they can interconnect endless games and worlds. Everyone in the platform can monetize their activities using in-game tokens called Aces™.

4. Hash Rush
This blockchain game is a sci-fi/fantasy themed game set in a fictional galaxy. For victory, players will fight, build and trade as their colony expands and develops as well. In the process, players could also gain Ethereum and other in-game items.

6. Decimated
This blockchain game is an open world dystopian themed survival where players can choose between a human or a cyborg cop as their character. It allows players to either compete or cooperate with other players on the platform.

Blockchain gamers sure have a lot to expect for the coming months as this is just the start of the list for 2019! Developers and the whole gaming community is set to not only meet the expectations of their fans but also to set higher standards for their fans as well as themselves.