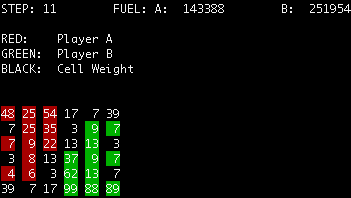 Fuel Battles is a grid based simulation and AI challenge designed for Ethereum. It is inspired by the conquest game Galcon, with cells on a grid emulating the planets and fuel instead of space ships, minus graphics.

A players goal is to capture as much fuel as possible from the grid and running the opponent out of fuel. The game mechanics mirrors the computation comes at a cost aspect of Ethereum. It requires to create good AI implementations that balance the utilization of gas (computing power) with the complexity of an AI strategy.

Use Cases: Status:
Working implementation, with basic AIs and probably still some bugs.

Software:
The contracts are written in serpent, the Ethereum high level language. They implement an environment in which AIs can compete within the blockchain.

Out of the box the software runs a local simulation with two predefined AIs competing about resources on a pseudo randomly generated grid. Actually playing the game, involves the coding of an own AI contract and let it compete with other AIs on the Ethereum blockchain.

You can grab the software and source code at GitHub:
https://github.com/heikoheiko/fuelbattles