How to get started: your first dapp, under one hour.

StephanTual London, EnglandMember, Moderator Posts: 1,282 mod
September 2014 edited December 2014 in Education
As of 10-dec-14 this tutorial is no longer up to date with the latest POC 7 feature set - please checkout the updated tutorials starting with this one

This tutorial is the result of many days of studying best practices on how to leverage what's available on Ethereum now, and making the technology available to users today, several months away from the network go live date (March 2015). For this reason, keep in mind development practices are likely to change heavily throughout the next few months, and the below is in no way indicative of what you should expect from the finished product. I have also kept a very narrow focus and omitted much information. For more advanced documents please instead refer to 'further reading' at the bottom of this page.

A dapp ('decentralized app') consists of two parts: a frontend, written in HTML or QML, and a backend (think of it as the 'database' for your frontend). We'll focus here on an HTML dapp.

Important Note: The client is in a constant state of flux, and the development version which you will be using is updated almost every day. To insure that the tutorial works for you, make sure that you are running the very latest version (it's a simple matter of upgrading every day as a matter of habit, please see the individual tutorials on how to do so).

Windows users: while it is possible to build AlethZero on Windows, at this point in time it is far too complex considering the beginner scope of this tutorial. Instead, if you do not have access to an OS X or linux computer, use a virtual machine and boot Ubuntu. 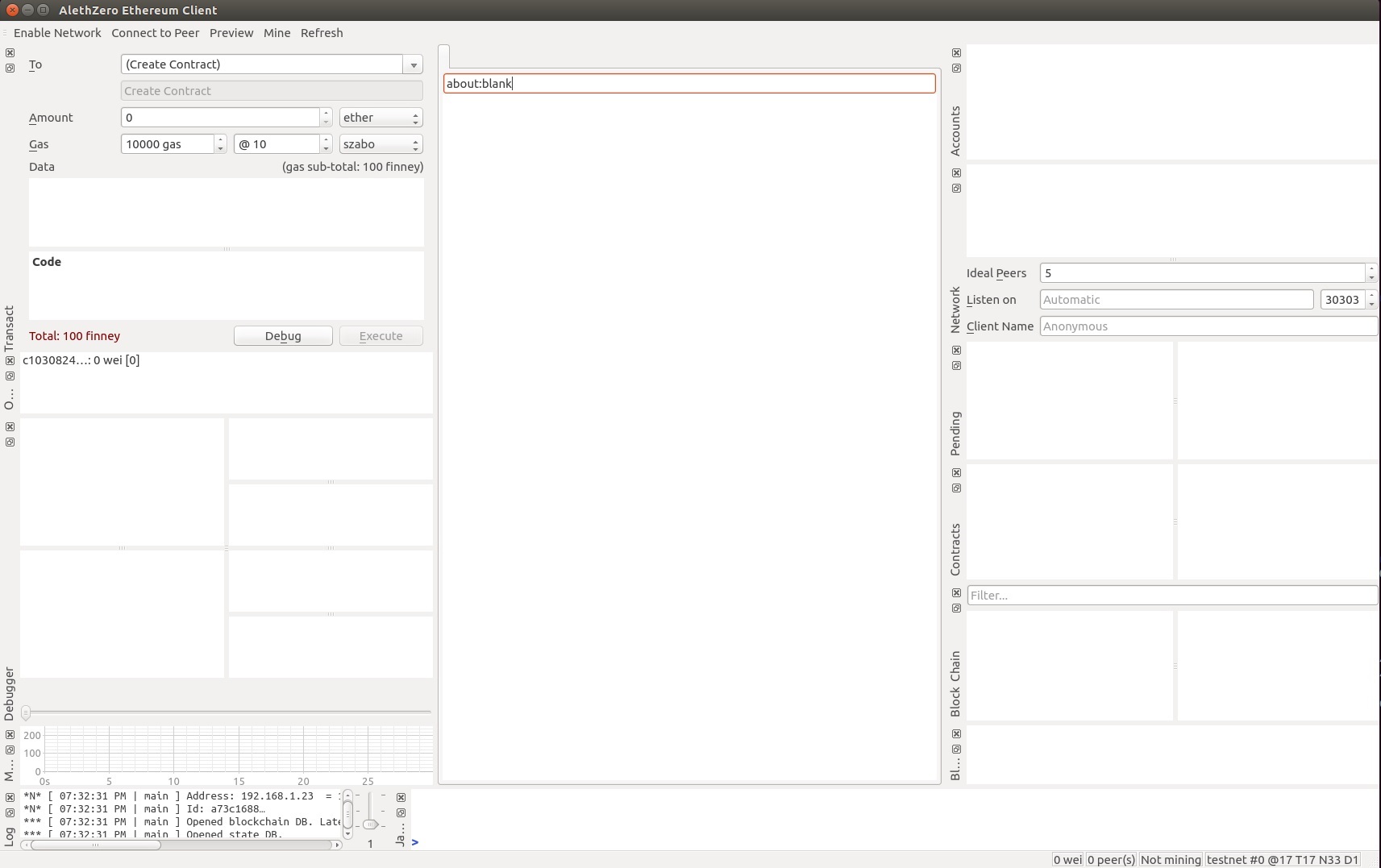 If your mileage varies, and not all the interface is visible, manually close all panes in the display by clicking their 'x' symbols until they are all gone, resize the screen to fit your resolution and re-add them manually by right clicking just below the titlebar (and just to the right of the 'refresh' button). 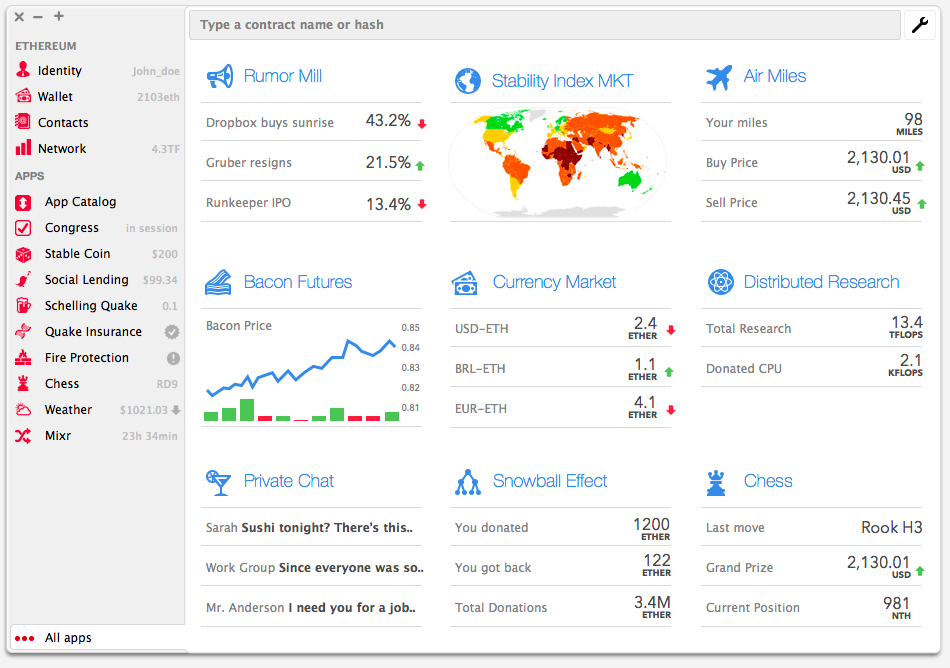 The above is a concept of a potential look and feel for the etherbrowser, accessing a dapp that itself acts as a dapp store.

So, now that we have made ourselves at home, let's build our frontend, but... what should we build?

Ethereum is a generalist programming platform. You can build games, financial applications, gambling apps, insurance companies, social networks, well, anything really! That said, it's always good to keep in mind your users' needs first and foremost, so what do you think they are missing from the centralized web? Well, trust of course! (as some iCloud users recently learned the hard way).

So, for today's tutorial we'll write a simple application that functions a bit like a bank, but with a transparent ledger that the whole world can audit. We'll issue 10,000 tokens, and because it wouldn't be much fun to keep all the tokens for ourselves, we'll also create a function that allows us to send them to our friends.

Note: feel free to grab all the code from https://github.com/stephantual/firstdapp or copy-paste the examples below.

Let's have a look at our interface: 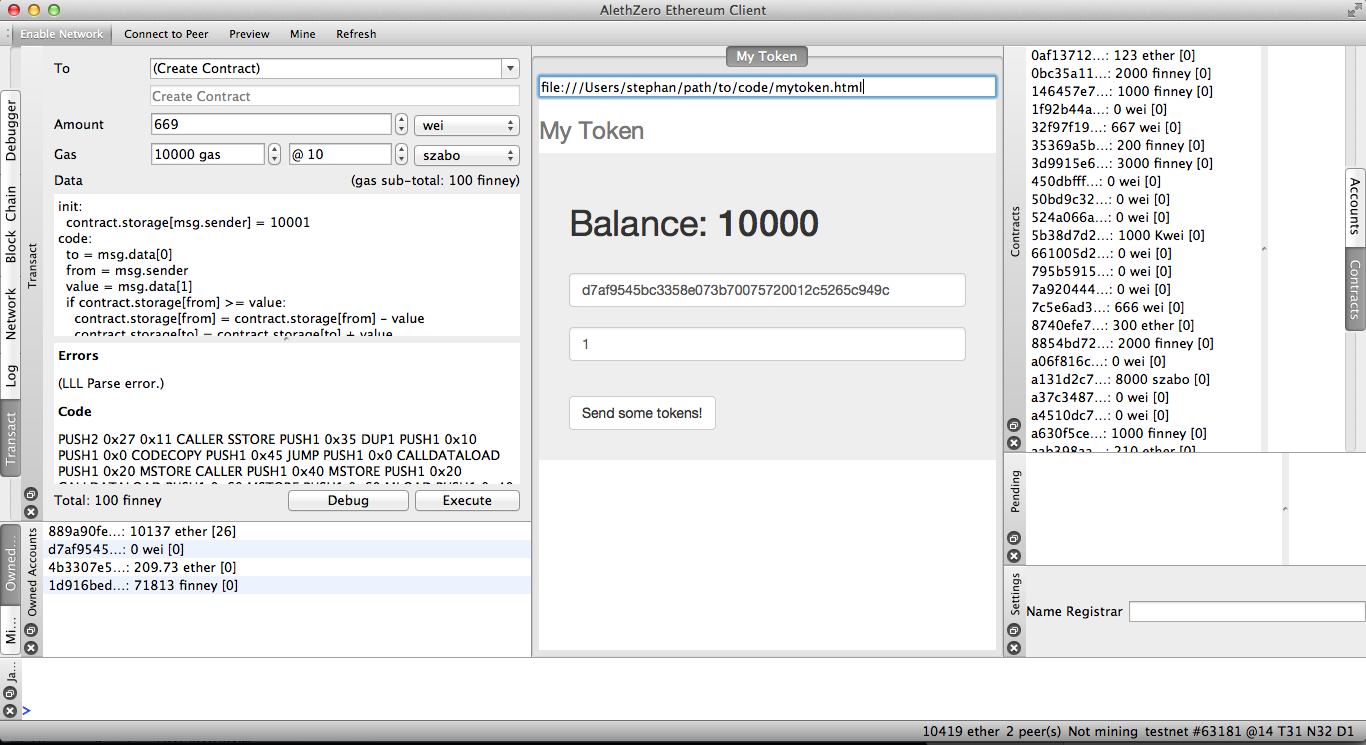 This is of course pure HTML, but the eagle-eyed amongst you will have noticed we're using the bootstrap framework to make the layout look a bit nicer.

Here's the full code: The code is straightforward: at the top, a balance placeholder , which we'll update dynamically using javascript a bit later on, located in a 'mytoken.js' file.

This is followed by a very simple form, with only two fields and a button. The first, , will allow us to specify the account address we wish to send our tokens to. The second, , specifies how many tokens will be sent.

Finally, a button that calls the (yet to be written) javascript function createTransaction();, which will call our backend and execute the transaction.

To load it in AlethZero, paste the code in a plain text editor and save it as 'myToken.html'. Then simply type the URL of the HTML file on your local hard drive in the AlethZero browser address bar, in my case: file:///Users/stephan/path/to/code/mytoken.html

Our backend (referred to as a 'contract' in Ethereum) is going to use a language very similar to Python, amusingly called Serpent. There are several other contract languages you can use when building Ethereum backends, including Mutan (similar to Go), LLL (similar to Lisp) and Solidity (similar to C++). We'll use Serpent because it's easy and has many examples available to learn more from.

As we mentioned above, we're building a little bank, so we'll need to do two things:
1) Instantiate at least one balance with some tokens, to get things rolling when the contract is first created.
2) Build a 'send' function similar to contract.send(account, amount) in order to move funds around.

Let's dive in, and feel free to open your favorite text editor to edit your first contract! Don't panic, it's much simpler than it looks. Contracts are divided into two parts. The first section, entitled init, is code that initializes the contract, its default parameters during instantiation if you will. That initialisation code gets run only once when the contract is created, and never again.

Let's look at this is a bit more detail: This is the initialization of our contract: it will only run once (because it's within the init block), and it does only one thing: initialize one account with a balance of 10,000 tokens. Storage in Ethereum contracts is structured as a key/value pair store: a key identifies where in the contract ledger the account lives, and requesting that key will return its value (in this case, 10,000).

Who's msg.sender you ask? Well, it's us! When we ask for the contract to be created we are the sender of the message, hence, we are msg.sender. This is a unique identifier on the network that cannot be forged, thanks to the cryptographic laws that Ethereum implements 'under the hood'.

Good, so now we have assigned ourselves an initial balance, let's have a look at the 'send' function, which will be executed each time we call the contract from now on. Note that because our contract in this particular case has only one function, we didn't bother naming the function send, it's assumed that every call to the contract will involve sending tokens. The first three lines are variable definitions: you probably noticed that this time the value of msg.sender is assigned to the variablefrom, which makes sense as it's the account calling the contract that is sending tokens.

To send tokens, we first check that the balance of the sender is higher or equal to the amount they are sending. This makes sense, you wouldn't want to send tokens that don't exist would you